“Immersion is arguably one of the most effective ways to teach little ones another language, and Whistlefritz does this spectacularly well.”

“Language immersion” means children learn a second language by hearing and speaking only that language without translation. No English is spoken. Immersion is how we all learned our native language and it’s the most effective method for teaching children a second language. Whistlefritz’s award-winning French and Spanish videos and music teach children languages using this immersion method.

CAN I USE THE LESSON PLANS IF I DO NOT SPEAK SPANISH?

Yes! We designed the Lesson Plans to support English as well as Spanish speakers. The Lesson Plans tell you exactly what to say to children in both English and Spanish. This approach supports adults who might be unsure of a natural way to phrase sentences in Spanish.

DO I NEED THE VIDEOS AND MUSIC TO DO THE LESSON PLANS IN THE BOOK?

*Note: There is one lesson that involves a scene from Las Estaciones. If you don’t own the video, you can check it out from most libraries.

HOW DO THE VIDEOS, MUSIC, AND LESSON PLANS WORK TOGETHER?

Whistlefritz has created language-learning programs that appeal to all types of learners by combining visual, audio, gross motor, and fine motor activities. The programs in our Spanish and French collections complement and reinforce each other by using various forms of media to their best advantage. Here’s how: 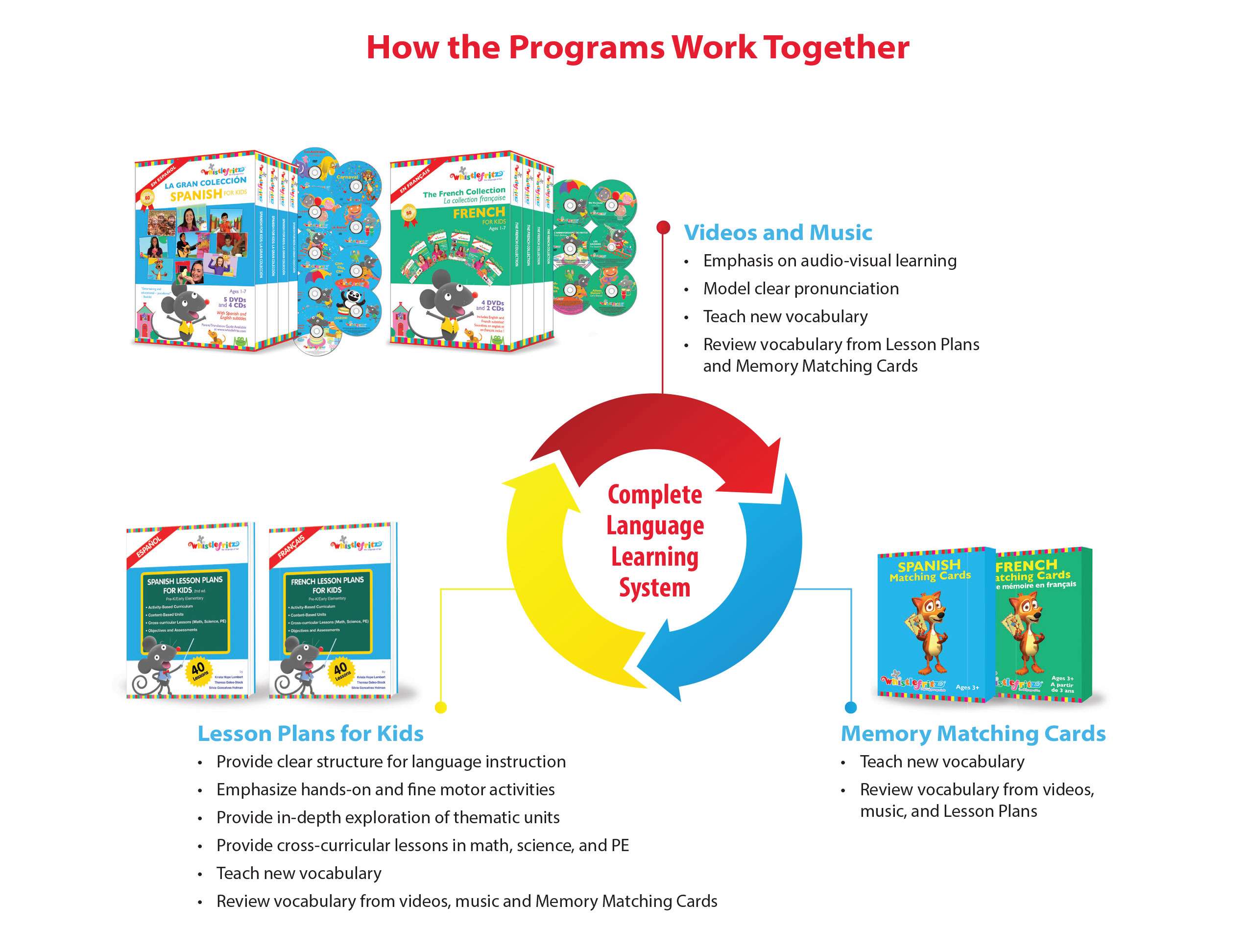 HOW ARE THE LESSONS STRUCTURED?

The families and teachers who have used our programs do the best job describing them:

“These lessons are designed so that children spend a significant amount of class time hearing and using the language as they do hands-on activities like crafts, sorting, coloring, and playing games. Each class begins with a short review and the introduction of new vocabulary. Next, the teacher models the activity, which provides exposure to the new words in context. Then, as children do the activity themselves, the teacher continues to provide comprehensible input.”
— Jennifer Brunk, Spanish Playground (Read full review here)

SHOULD I WATCH THE VIDEOS IN A PARTICULAR ORDER?

The videos can be watched in any order you’d like. All of the videos teach greetings, introductions, and numbers. Each video focuses in depth on specific themes and vocabulary. For example, VAMOS A JUGAR (Let’s Play) teaches the parts of the body and action words. ADENTRO Y AFUERA and DEDANS ET DEHORS teach positional words (e.g. up, down, behind, in front of), rooms of the house, household objects, and foods.

While each video focuses in-depth on a particular theme and vocabulary, the videos that we created later in time review key vocabulary from earlier videos. For example, animals that appear in LOS ANIMALES make cameo appearances in skits in VAMOS A JUGAR. Similarly, body parts and action words that children learn in VAMOS A JUGAR appear in songs in ADENTRO Y AFUERA. These vocabulary “reviews” are so subtle, you probably won’t notice them. Instead of formally “reviewing” vocabulary, we reinforce words children already know by including them in new skits and songs and contexts.

As we were creating additional videos, our earliest fans were growing. So, we slightly increased the pace of action and the complexity of vocabulary in later videos to keep up with our growing fans. For example, while the earlier videos use the verb “is” primarily in the present or past tenses, we introduced the conditional tense “would be” in LA FIESTA DE FRITZI. This tense will be reinforced in future videos.

The videos were created in the following order from first to last: LOS ANIMALES, VAMOS A JUGAR, ADENTRO Y AFUERA, LAS ESTACIONES, and LA FIESTA DE FRITZI. If you have a child of 3 or under, we would recommend starting with LOS ANIMALES and watching the videos in order. If you have a child older than 3, we would recommend starting with ADENTRO Y AFUERA, then circling back to the earlier videos.